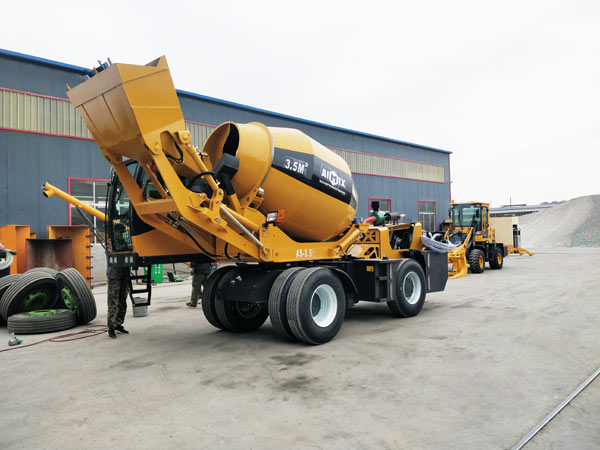 Mobile concrete mixer can evenly mix cement, sandstone and water, same as other concrete mixers for sale. While, compared with the stationary concrete mixer, mobile one has an obvious advantage of movable because of the mobile concrete mixer is equipped with tires. It is widely used in the construction spots when changing sites. That’s why most customers prefer mobile one among various types of concrete mixers. Worth mentioning, our mobile mixers have been exported to more than 120 countries, including Kenya, Namibia, Nigeria, South Africa, Vietnam, Burma, Pakistan, Uzbekistan, Bangladesh, Laos, Fiji, Zimbabwe, Zambia, Australia and Indonesia etc.

In order to meet different customers’ construction need, Aimix Group has produced many kinds of mobile concrete mixers for sale. On the whole, it can be divided into three series: AS series, JZC series, JZM series and JZR series. Here I will give you full introduction of our mixers.

AS series mobile concrete mixer is self loading type. It is also one of hot-selling concrete mixing equipment in Kenya market. AIMIX Group has manufactured several models to meet customers’ different construction demands. Models include AS-1.2, AS-1.8, AS-2.6, AS-3.5, AS-4.0, AS-5.5 and AS-6.5. You can opt for an ideal one according to project sizes.

JZC series concrete drum mixers include JZC 350 and JZC 500. The discharge volume can reach 350 L and 500 L. The capacity is ranging from 10 m3/h to 20 m3/h. The small capacity is more suitable for small construction, projects, used for uniform concrete production. It also can be used in simple construction, such as bridges, buildings and tunnels. Because it is equipped with movable tires, it is easy to operate and maintain. The most important thing is that JZC series concrete mixer is the cheapest mixer among all of Aimix concrete mixers sale.

a. The mixing drum is drive by gear. It has less energy consumption.

b. These mobile electric concrete mixers for sale are driven by electric engine. The elector motor can supply sufficient electricity.

c. The JZC series concrete mixer is easier to operate, which is portable with tires.

d. Lifting hopper is placed in a lower place, which is more convenient to feed aggregate.

b. In working status, under the effect the drum rotating and aggregate gravity, the mixing drum clockwise rotates for material mixing.

c. The JZM series concrete mixer can be dragged by trailer to different construction spots.

b. Drum mixing depends on friction between rubber rad and wheel, which has less noise. Besides, the working efficiency can be greatly improved.

c. The JZM series concrete mixer is priced decently. Customers can decide whether mixer has the tire equipment or not.

a. The rubber pad is assembled around the external surface of concrete mixing drum. With rotation of wheel, the concrete mixer drum will be driven.

b. When the feeding hopper climbs to a certain height, the discharging door will open. Then the aggregate will be poured into mixer drum.

a. Diesel engine, as the power source, can ensure normal working in no electricity areas.

b. There are two options for aggregate feeding: hydraulic tipping hopper and wire rope hoisting.

c. Water supplying can be controlled automatically. The time relay in the electric control system can control the water volume that every mixing cycle needs.

Hope that the introduction can help you know Aimix mobile cement mixers better. If you still have some questions, please leave them in the following form or contact us via email: market11@aimixgroup.com. We will reply you as soon as possible. 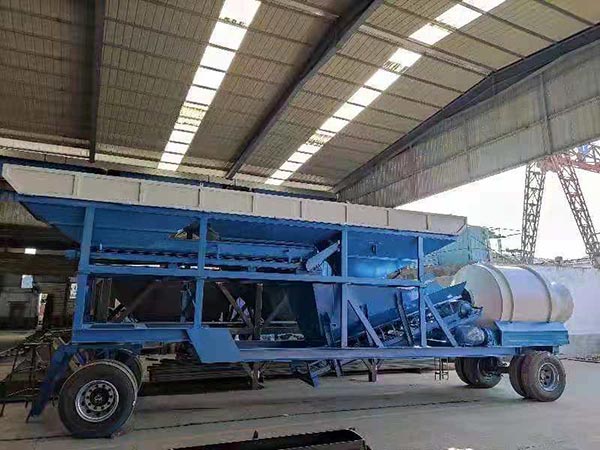 Drum Type Concrete Batching Plant Has Been Transported to Chile